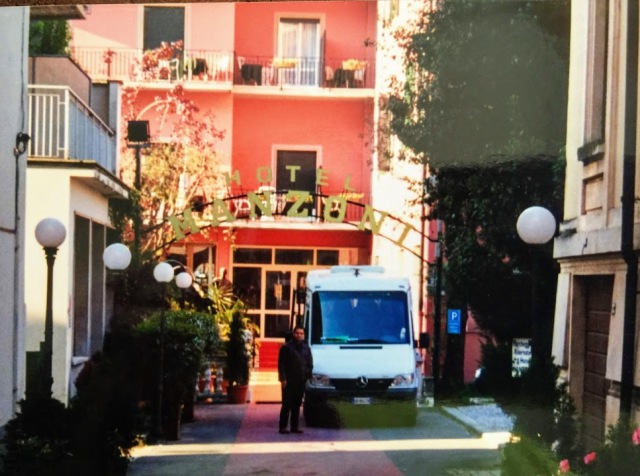 April, 2002. Hotel Manzoni in Montecatini Terme was the destination of the Sunday Traveler (before she had even thought of being a Sunday Traveler), well, not destination but the lodging for a little over a week while on a tour of a part of Northern Italy in the Tuscany area. It had been years since I had been in Europe, and I was all agog at everything in this little town, best known for its thermal waters and spas.

The tour guide got registrations started in this quaint hotel, and I was assigned to room 222; I had learned a little Italian before going, but didn’t know how to say two twenty two when I asked for my key, so I simply said two, two, two in Italian. Go figure why I didn’t learn this while I was there either. We all got our keys, went to put our luggage away, and returned to the lobby for a little wine and cheese reception. The hotel had checked my group of twelve Americans in as well as a group of Germans that had come in shortly before we arrived. It seemed a bit funny that as we came down stairs for wine we heard German polka music.

We were off to a fun start, why not? Our group of twelve made this home for the days we were in Italy and loved it there 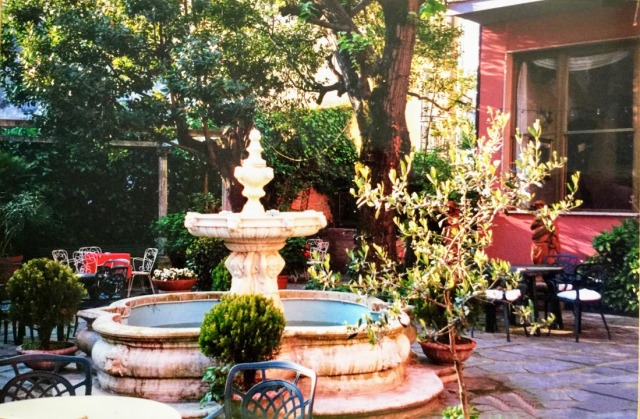 The hotel did not have a spa then, but a nice little garden

The group would rise early every morning and have a light breakfast in the hotel, but after a couple of days I was feeling very brave and would walk in to the little town about five minutes away and go to a cafe and have an espresso and pastry on my own. The group would then get in our little private tour van and take off to surrounding areas for the day.

I hadn’t met any of the other people in the group before the trip, so it was interesting to learn about all the others amidst our days together; fun exploring with one or two others, or branching out on my own once I knew at what time I had to be back at the van for continuing on, or for our return to the hotel at the end of the day.

Ciao, and I will show you all a few photos of the little town of Montecatini Terme as it was in 2002 next week.  I must say I googled this hotel in putting this post together and saw pictures of Hotel Manzoni as it is today, and it has changed considerably; I’m glad I got to see it as an old hotel with character.