The Sunday Chronicle…More On Mexico

The years have gone by, but the memories remain of those summer trips to Mexico when I was young.  Each summer seemed to change our mode of transportation on getting there; train travel being a favorite. Three days of reading, playing cards, and eating wonderful meals in the dining car. The photo above has to be our departure from San Antonio, Texas, my home town, but again, it could be somewhere in Mexico, as I have no written clues left me on the back of the photos I’ve found recently.

We boarded the train in San Antonio, and at the Mexican border the locomotive was switched over to a Mexican engine, with a lot of bumping back and forth and steel against steel grinding and screeching, and then we were off into our adventure. The small border towns slowly gave way to scrub brush, Saguaro Cactus, and dry open land; and as the speed of the train picked up we settled in to a cozy compartment that would be home for the next few days.

Walking through the train  on our way to dinner was always an adventure, peeking into other compartments, seeing all the people who were a part of our onboard family, and what they were doing. And sticking our heads out the window on the sections of the train that connected one car to another.

The dining car always amazed me; a moving restaurant, that had tables on either side of the car, covered with crisp white table cloths, and set with silverware that was heavy, and nothing like the utensils we had at home. Who could concentrate on food with the vistas going by outside the windows.

The sleeping berths in our compartment would be pulled down and made up for us while we were at dinner. Sleep was always non-existent though, the first night, with the excitement of sleeping in the moving train, and hearing the occasional wail of the train’s whistle as we sped past little towns. The window shade was pulled down tight, but little peeks from under the shade were taken to see lights far off in the distance somewhere, a sign of life out here in the middle of what seemed to be nowhere.

Stops at little towns during the day was a colorful, exciting, almost circus with vendors from the village on the train platform with baskets laden with appealing fruits, sandwiches, cold drinks, and sweets that created a lovely picnic for us back inside our compartment when we pulled out of the station. The train made stops in some of the larger towns along the way too, with a chance at some places for a few minutes to explore the station

This photo is from a post card found amongst my photos, of the train station in San Luis, Potosi, Mexico. I’ve enlarged the mural for a better look 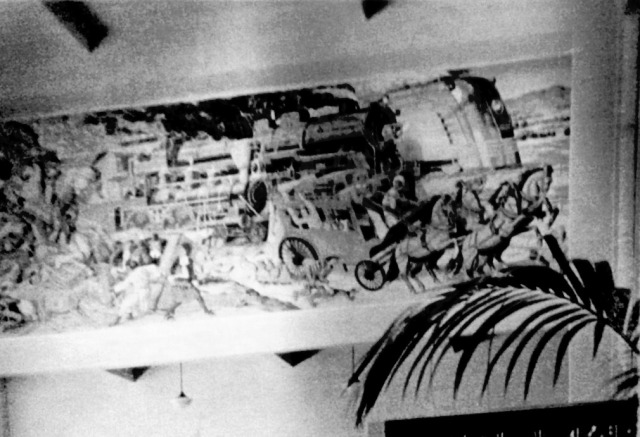 Hard to say what year this was, but in researching on Wikipedia, I’ve found the artist to be Fernando Leal (February 26, 1896 – October 7, 1964); here is what is said about this mural: “In 1943, he painted two panels in the train station of San Luis Potosí called El triunfo de la locomotora (The triumph of the locomotive) and La edad de la máquina (The age of the machine).[1] The first of these contrasts the old and new ways to travel. The old way, by foot and horse/donkey, shows robbery and other violent scenes, while the train is shown as traversing great distances”.

And traverse great distances we did, either to Guadalajara or Mexico City as our final destination on the train. I always knew that the train trip was over, but further journeys within Mexico with our Mexican family were on the horizon. Our trip was just beginning.

The first installment of Mexico memories can be found here

46 Responses to The Sunday Chronicle…More On Mexico