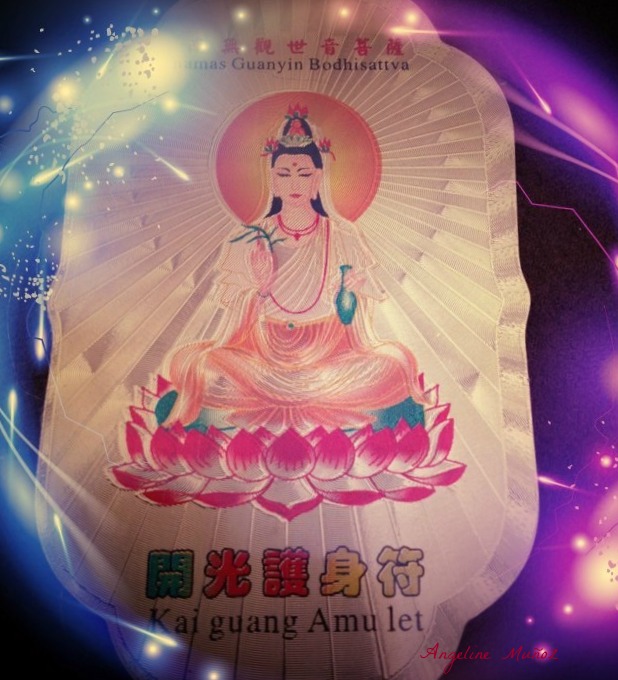 Do you remember the monk on Market Street I spoke about? That post is found here. The bracelet isn’t the only thing he gave me, he pressed this amulet into my hand as well.

I left the prayer happening with the monk feeling extremely light and full of peace, and attributed those feelings to a day of warm sunshine, and my day of freedom in the City. I slipped the amulet into my purse and didn’t think about it again until I got home that evening.

I did a little research on Wikipedia, and had to laugh when I saw another couple of entries in Google from people who had also been given this amulet by monks they encountered quite unexpectedly, as I had, and being kind of nervous as to what it meant.

Wikipedia tells us that Kaiguang is the Chinese term of consecration of a statue of a deity. The literal meaning of Kaiguang is “opening of light”, and is often performed in the Buddhist and Taoist faiths by senior clerics; it is done by inviting a specific deity, Buddha or bodhisattva to empower an “empty” effigy of themselves and to fill it with a divine essence.

I now have to wonder if my feelings of peace and lightness after leaving the monk had anything to do with this amulet.

For entries on other types of light, visit Ailsa’s weekly travel challenge, this week on light.

I processed this iPhone photo with the app, FilterMania2 for the light effects.

Love travel and photography. Living in Northern California. Photos of locations visited are personal file photos.
View all posts by Angeline M →
This entry was posted in A Little Bit of the Everyday and tagged amulets, Buddhism, FilterMania2, iPhoneography, kaiguang, light, Taoism. Bookmark the permalink.