Aquarium of The Bay, San Francisco

We spent a weekend with our grandson in San Francisco recently.  Interesting that any plans we had for what we wanted him to see quickly evaporated when he saw a picture of a shark on a banner at Pier 39 in front of the Aquarium of the Bay, saying that you could pet the shark. We had already spent the better part of Saturday on BART, having lunch at the Ferry Building, riding a cable car, riding a pedi-cab down the Embarcadero to Pier 39, bungee jumping at Pier 39, watching a juggler/comedian. We were pooped. We promised Evan we would return the following day to see the shark. 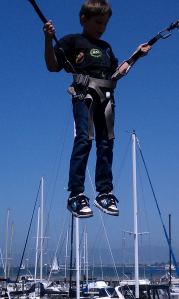 Sunday morning after  breakfast we made good on our promise, and headed back to Pier 39.  I’ve been to Pier 39 many times, but have never been in the Aquarium of the Bay, and I am so grateful to a curious grandson, because I’d been missing out. 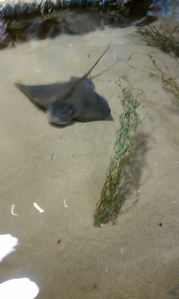 Love travel and photography. Living in Northern California. Photos of locations visited are personal file photos.
View all posts by Angeline M →
This entry was posted in A Little Bit of the Everyday and tagged Aquarium of the Bay, Aquariums, Embarcadero, Pier 39, postaweek2011, San Francisco, San Francisco Ferry Building. Bookmark the permalink.

6 Responses to Aquarium of The Bay, San Francisco